Two nights ago I went to a book signing at the King’s English Bookstore for Laurie Halse Anderson author of Wintergirls, Speak, Chains and lots more.  I was fortunate to be able to read the arc courtesy of Natasha Maw who is seriously one of the most generous people I know and who I carpooled with. My review of Wintergirls is here.  Laurie Halse Anderson’s website and blog.

I wasn’t quite sure what to expect because I haven’t met many authors face to face and I love her book Wintergirls. I didn’t want to be disapointed and I am happy to report that Laurie exceeded every expection. I am in awe of Laurie Halse Anderson and am in love with her books and with her even more than before. I am still mulling over the things she said and dancing on air.

I have only met one other person like her before. They both have an amazing ability to make people feel comfortable and valued for who they are. When she spoke to you she really listened and you felt that she really cared about what you were telling her. Of course I also observed her talking with other fans, which is one of the advantages of being at the back of the line. I watched her talk on a cell phone to a girl’s mother who couldn’t be there, write down the information to contact another reader’s friend who was sick and unable to make it. Then Laurie hugged another girl who told her that after reading Speak she got help for sexual abuse.

I thanked her for writing about such tough subjects as a lot of people don’t want to talk about those subjects, but they exist. I told her I have seen students deal with all those issues in my classroom and thanked her for giving voice to issues such as rape, eating disorders and cutting.  She replied by saying she often feels like she should have a crown with an elephant on it because it seems she talks about the elephant in the room, even if no one wants to. I am glad there is high quality literature that gives people a forum in which to discuss these topics.

After she signed our books, she then spoke to a small intimate group of authors, book bloggers and fans. A few of Utah’s authors were there too, including James Dashner, Sara Zarr, Emily West Smith, Ann Bowen and others. Who I happened to be in line in front of, so it was a fun experience to meet more authors.

She addressed my concerns about someone who is struggling with an eating disorder possibly being triggered by the book, which of course she had too. When she talked with some of the experts in the field they said just going to the grocery store can be triggering so not to worry too much about the book. She did mention that she has had some people say I don’t think this is the book for me right now, and that’s fine. She understands.

She said some things about writing I really liked and one in particular struck a chord with me. She said that often times women who are stay at home moms who want to be writers sell themselves short. They aren’t as assertive in getting paid or as good at negotiating contracts. They say things like, you don’t have to pay me that much or I’ll just write for free. Well she says she was writing as a single mom and it was her sole source of income. She had to learn to handle things differently. She learned by watching other people, mostly men in the writing business, and said you can combine art and business. That really resonated with me you know the whole believe in yourself and be confident.

So here is the confession and by the way dear sister, I am telling your secret, which I promised I would do. I have goals, aspirations dreams whatever you call it of becoming an author. I’m working on a few writing projects and my sister Holly is the same. She’s already written a picture book, which I think is quite an excellent book. Maybe we will be the next Bronte sisters, except there are only two of us. Guess that means we will have to recruit someone.

Thank you Laurie for your time, wisdom and grace!

One thought on “Meeting Laurie Halse Anderson, author of Wintergirls” 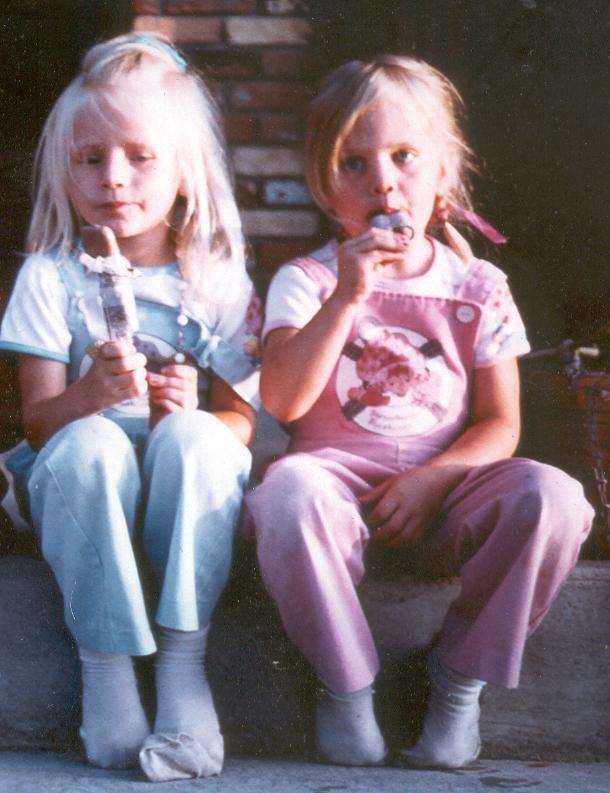 All posts including and not limited to book review, posts and photos are © Cari Hauptman, Holly Papa and Bookscoops.wordpress.com 2007-2014

Unauthorized use and/or duplication of this material without express and written permission from Bookscoops.wordpress.com authors and/or owners is strictly prohibited.

We are happy to receive review copies - acceptance of a review copy does not guarantee a favorable review or even a written review. We read and review children and adolescent literature only and there are two blog contributors. For a more detailed explanation of the type of books we read and how to contact us please see the contact page.

We love comments! We reserve the right to remove or edit comments especially those that are offensive or commercial in nature.